HomeVisit to the Russian Academy of Arts

Visit to the Russian Academy of Arts 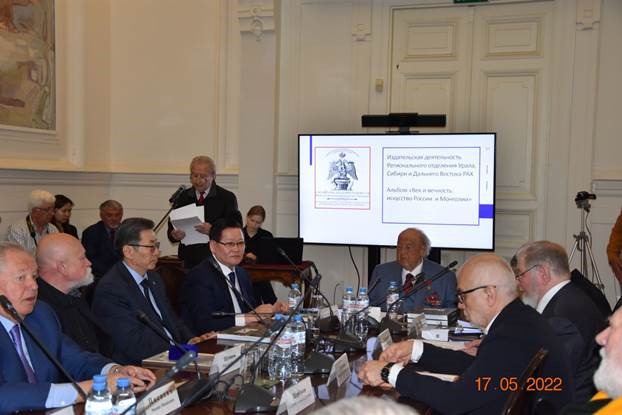 On May 19, 2022 the Ambassador of Mongolia to the Russian Federation participated as an Honorary Guest in the Meeting of the Presidium of the Russian Academy of Arts.
During the meeting, member of the Presidium, Academician of the Russian Academy of Arts, Mikhail Shishin introduced the album “Century and Eternity of Fine Arts of Russia and Mongolia”. The album is a catalog of works by Mongolian and Siberian contemporary artists, that were exhibited in Barnaul, Irkutsk and Ulan-Ude on the occasion of the 100th anniversary of the establishment of diplomatic relations between Mongolia and Russia. Academician Mikhail Shishin also noted the success of the famous Russian artist and sculptor Zurab Tsereteli’s exhibition “Secret magic realism” held at the Mongolian National Art Gallery in April-May, 2022, and expressed his gratitude to the Mongolian side for support.
Ambassador U.Enkhtuvshin congratulated the leading academicians of the Academy of Arts on the publication of the catalog “The Century and Eternity of Fine Arts of Russia and Mongolia” and on the presentation of the Zurab Tsereteli’s exhibition in Ulaanbaatar. Ambassador underscored to spare no effort to further promote cooperation between artists from both countries. The Russian Academy of Arts is considered as the successor of the Academy of Arts and Sciences, founded in 1724 by the decree of Peter I. Zurab Konstantinovich Tsereteli has been the President of the Academy since 1997 and was recently re-elected at the meeting of the Academy at the age of 88. Hero of Labour of the Soviet Union, People’s Artist of the USSR and Russia, Zurab Tsereteli was awarded with the Lenin Prize (1976), the USSR State Prize (1970, 1982) and the State Prize of the Russian Federation (1996) and is a world-renowned artist with over 5,000 works.
Zurab Tsereteli’s works are displayed in countries such as Brazil, Great Britain, Spain, France, USA, Japan, Georgia and Lithuania. Reproductions of his sculptures stand in front of the UN building in New York and in front of the UNESCO building in Paris.